Opera is a web browser from Opera SoftwareASA in Oslo, Norway. The browser is available free of charge and without corporate advertising since version 8.5 from September 2005.

The versions of Opera

In September 1996, Opera 2.0 was released as the first public version, and Opera 10.0 has been available since September 2009. Opera works on a range of PC operating systems, cell phones and other devices. In addition to versions for Microsoft Windows, AppleMac OS X, Linux, FreeBSD and Solaris, the first version of Opera Mini for MIDP-compatible cell phones and PDAs was released in 2005. For Pocket PC and Smartphones with the operating systemWindows Mobile, Symbian OS and Linux Opera Mobile is offered. 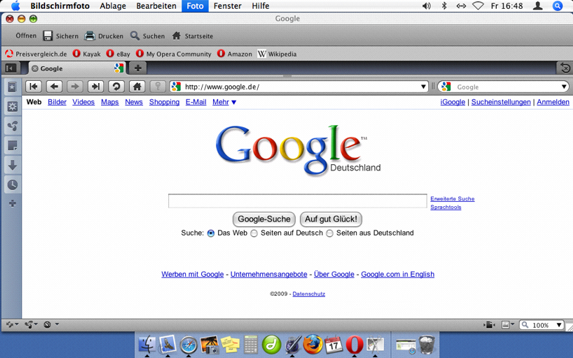 Screenshot of the Opera browser

Together with Nintendo, the Nintendo DS(i) browser was developed, which can be used to access websites from the game console. A variant of Opera is also available for the Nintendo console Wii. A version of Opera was also developed for the non-profit project One Laptop der Child( OLPC). Further variants of Opera are intended for set-top boxes, Internet telephony, navigation devices or household appliances.

Opera consists of the components browser, e-mail client and Dragonfly.

As a model for other popular browsers, Opera has worked since the first version with tabs that keep several websites open at the same time. A changeable tab bar displays thumbnails of the open websites, which can be activated with a mouse click. When opening a new tab, a quick selection presents a user's favorite websites. After a computer crash, the application automatically restarts and restores all tabs.

Websites are dynamically rendered using the platform-independent rendering engine Presto, which also supports the W3C 's Document Object Model( DOM). A page zoom from 20% to 1,000% presents the websites at the desired size. When writing posts in forums or blogs, the integrated multilingual spelling help with the engine of OpenOffice marks the possibly misspelled words. The contact data of other users can be collected in an address book, as well as notes and comments on individual websites.

Unwanted pop-up menus or plug-ins can be blocked, images can also be temporarily hidden. The default setting blocks all pop-ups that originate from a source other than the website the user is accessing.

Opera has an integrated email client that manages the user's messages in a central list and works with any IMAP or POP services. The user can create filters for specific senders or the history of a correspondence.

Emails are sent in rich text format or HypertextMarkup Language( HTML). Opera Unite can also be used to send and receive files without going through a website. Multimedia content can be displayed or music streamed from the browser.

Opera Link is suitable for synchronizingdata between several devices. Bookmarks, search engine settings and the addresses of visited websites are transferred. Opera Unite was released with Opera 10 to start a web server directly from the browser.

Opera Dragonfly is a developer tool released under an open-source BSD license to examine DOM elements or JavaScript code and detect the effects of cascading style sheets( CSS) on individual DOM elements. Improved JavaScript thread handling, XHR and HTTP code monitoring, and a cleaner interface are planned for Opera Dragonfly 1.0.