The OR gate, also called OR logic, is a Boolean product of the disjunction of an OR operation between the two inputs" E1" and "E2": E1+E2.

The logical OR function uses the plus sign (+) in the equation form to link the variables. 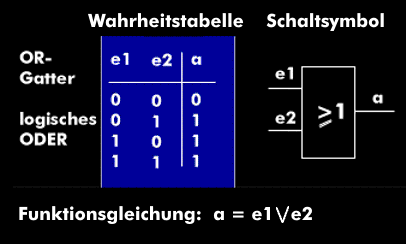 The output "A" of such a logic is always "1", if one of both inputs or both inputs represent a "1" at the same time. If the OR gate has three or more inputs, then the output becomes logic "1" as soon as one or more inputs are logic "1". The NOR gate is formed from the series connection of an OR gate with a NOT gate. Circuit families for OR gates are the 7432 in TTL logic and 4071 in CMOS.