NAND flash memories are non-volatile memories with sequential access that retain their memory states even after the supply voltage is switched off. NAND flashes have a planar structure, they work with special MOSFETs that hold the charge and are connected like NAND gates.

When interconnecting NAND flashes, complete blocks are interconnected, consisting of many pages. A page in turn consists of a number of bytes, which can be between 512 B and 8 KB. The pages are in turn combined in blocks to form memory sizes of 512 KB to 2 MB. 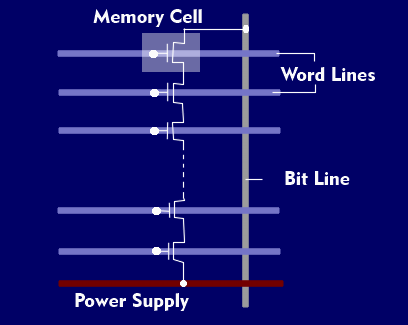 Structure of a NAND flash array

When erased, the blocks are erased as a whole. When NAND flash memory is manufactured, there are defective blocks that are listed by the manufacturer in a special register so that they are not used for data storage. The memory cells themselves can be Single Level Cells( SLC), in which case they can store one unit of information(bit) per memory cell. Multi- level cells( MLC), on the other hand, which operate with four voltage levels, can store two bits in each memory cell. Other MLC cells, which operate at eight and sixteen voltage levels and are called triple level cells( TLC) and quad level cells( QLC), store as many as three or four bits. The multi-level memory cells reduce the space required.

The further development of planar NAND flashes, which are manufactured with a structure width of 16 nm, leads to the vertically structured and more compact V-NANDs or 3D-NANDs or 3D-V-NANDs.