The profiles of MPEG-2

MPEG-2, standardized to H.262, has several profiles, some of which are scalable; this means that video sequences with different picture quality can be created from existing video data streams. The different profiles represent video displays with resolutions between 352 x 288 (Low), 720 x 576 (Main) and HDTV with 1,440 x 1,152 or 1,920 x 1,152 (High) pixels with an aspect ratio of 16:9. To be able to compress studio recordings in high quality, MPEG-2 has a color subsampling of 4:2:2 with the 422 profile.

The Main profile and the Main level are among the most widely used profiles, especially in DVDs and digital TV. The High profile, in combination with the High level, is aimed at HDTV. The resulting data rates range from 4 Mbits/s to 166 Mbits/s and are compressed by factors between 10:1 and 40:1, resulting in an MPEG-2 stream of 4 Mbits in the case of the 166 Mbits/s stream.

MPEG-2 supports corresponding audio sequences, which are multiplexed before transmission and then transmitted as a transport stream and synchronized with the video sequences. MPEG-2 audio is compatible with MPEG-1 audio and also provides AAC compression. 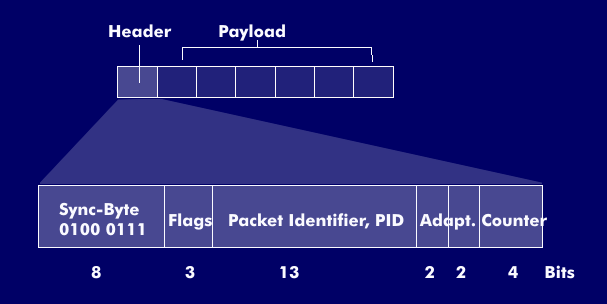 MPEG-2 is also designed for client- server applications and can be distributed over heterogeneous networks. MPEG-2 is the basic technology for DVDs; however, it is also used in Digital Video Broadcasting( DVB) and in set-top boxes.

The extension of MPEG-2 specifications to HDTV allowed MPEG-3, originally designed for high-definition television (HDTV), to be abandoned in favor of MPEG-2.