The M12 connector is an industrial connector used in fieldbuses and also in Industrial Ethernet. It is a round connector with metric thread, which is manufactured in several variants and codings for different protection types.

For industrial Ethernet, there is a 4-pole M12 variant. In addition, there are also 3-, 4-, 5- and 8-pole versions. The different 4- and 5- pin variants are used in fieldbuses and are standardized by the corresponding user organizations. The 8-pin version can be used in Gigabit Ethernet. A special development also supports 10 Gigabit Ethernet in the 10GBase-T version. 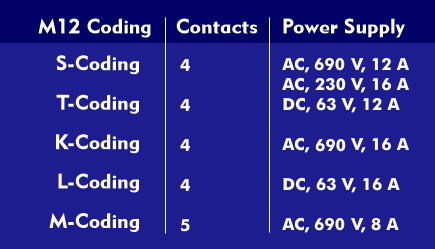 With the M12 connector, a special M- coding ensures that the M12 connector cannot be connected with incorrect connections. This connector, which is standardized under IEC 61076-2, has the designation M12-4-D. In device connection technology, there are many other possible uses for the M12 connector in addition to fieldbus applications, although these have considerably more functions. In this context, intelligent sensors or various communication interfaces implemented in the field devices should be mentioned. For these and other applications, high-pole M12 connectors with 12 and 17 pins have been developed. Since the dimensions are unchanged, the connector pins of the high-pole M12 connectors are only 0.6 mm thin. The compact M12 housing has a diameter of 20 mm and a length of 60 mm. 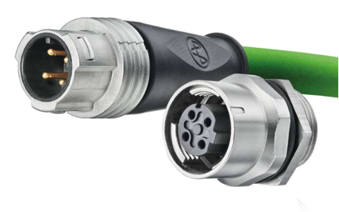 As far as the various M12 codings S, T, K, L and M are concerned, they differ in the number and arrangement of the plug contacts and, above all, in the transmissible voltage supply and power transmission for connected terminal devices. In addition to the classic M12 connector, there are other versions with larger diameters and different numbers of poles, such as M16, M23 or M25.