The LC connector is a high- performance fiber optic connector for single- mode fiber and multimode fiber that has an average insertion loss of only 0.2 dB and a return loss of 55 dB. It has a push-pull locking mechanism and is designed for 500 to 1,000 mating cycles. The lever must be pressed to release the latch. The LC connector is twist- proof and can be used with polarization maintaining fiber ( PMF). It is about half the size of the SC connector, allowing twice the packing density. The LC connector has a ceramic ferrule or a 1.25 mm diameter metal ferrule. 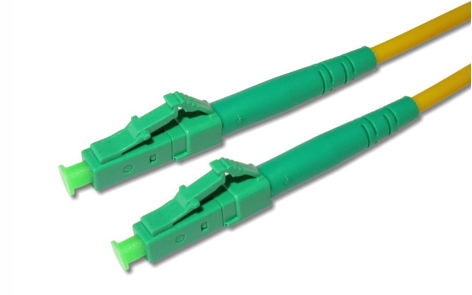 The LC connector is used in active optical transmission technology, data centercabling, 100 Gigabit Ethernet( 100GbE) and mini- GBIC LAN cabling in Europe and the United States. It is also expected to replace the larger SC connector in standardized cabling systems according to EN 50173 and ISO11801. The LC connector is available as a single connector and as a duplex version. The LC duplex connector is standardized in the IEC 61754-20 standard and corresponds in its space requirements to an RJ45 connector. 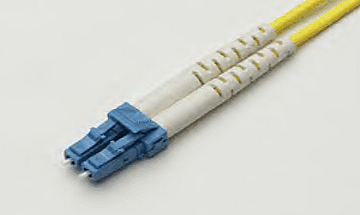 Monomode fibers can be equipped with different face couplings. For example, with Physical Contact( PC), Ultra Physical Contact( UPC) and also with Angle Polished Convex( APC). If the optical fiber that is inserted into an LC connector has an Angle Polished Convex coupling, then the connector designation is LC-APC connector. Such LC-APC connectors are mainly used in building cabling and have the advantage of high return loss.

LC connectors can be equipped with optical fibers of all OS classes. In the duplex version, several duplex connectors are joined together for multi-fiber connection systems in data centers. Eight connections can be realized with four LC duplex connectors, twelve with six duplex connectors. The corresponding systems are referred to as Base-8 or Base-12 cabling. The LC connector is also available in a mini version as mini LC duplex with a reduced pitch of 5.25 mm. It is identified by a yellow clip.