Individual light-emitting diodes or single- chip LEDs can only generate a certain luminous fl ux because of the heat that has to be dissipated. Only by interconnecting several light-emitting diodes to form an LED array or an LED matrix can luminous fluxes with higher brightness be generated. Their values are comparable to those of power LEDs. Further advantages of LED arrays are scaling and higher reliability.

An LED array is an electronic circuit in which any number of light-emitting diodes are arranged in rows and columns and interconnected. The anodes of the LEDs are located on the row lines, the cathodes on the column lines. The individual LEDs are controlled via the column and row lines. Using this configuration, each LED can be controlled individually. In addition, the individual LEDs of an LED array with multiplex technology can be controlled one after the other so quickly that the human eye does not notice the switching. LED arrays can consist of individual light-emitting diodes, but they can also be built extremely compact as CoB LEDs, chip-on- board (CoB), which forms a uniformly radiating surface for the viewer. Their efficiency exceeds 100 lumens per watt( lm/W). 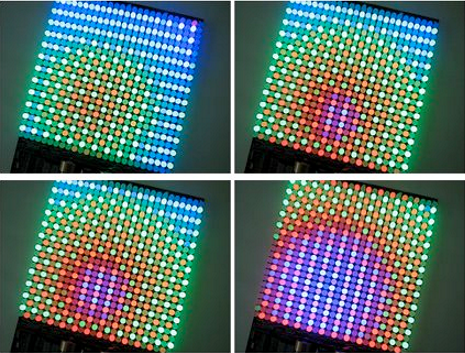