The structure of the IPv6 header

The IPv6 header consists of a 4-bitversion field for the IP version, an 8-bit priority field ( traffic class) for the quality of service, and a 20-bit flow label field that is used by the data source to identify data packets that are to be given special handling with a specific quality of service. In addition, the IPv6 header contains the 16-bit payload length field, the next header field (8 bits) for entering the next protocol, the 8-bit hop limit field, which corresponds to the time-to-live field in IPv4, and the source address field, which is 128 bits long, and the destination address field, which is just as long. 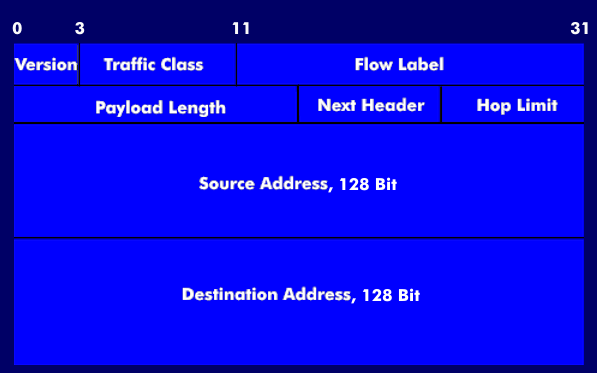 Due to the extended address space of 128 bits, an almost infinite number of addressable nodes can be addressed; the number of addresses corresponds to that of a 39- digit decimal number. The simplest form of an IPv6 address comprises 128 bits as a node address. Certain address formats are preset by means of a format prefix( FP). These are the formats for unicast, multicast, and for some protocol-dependent address extensions.

In order to ensure an optimal routing of the data packets as well as a separate processing of the datagrams by the network, there are options for IPv4 and optional extension headers for IPv6. These are headers whose sequence is fixed, which are concatenated with each other and follow the IPv6 header. Extension headers include the hop-by-hop option header, routing header, fragment header, authentication header, privacy header and the destination option header. The IPv6 header can be extended by the Internet Control Message Protocol header, ICMPv6, for error messages and handling.

When migrating from the IPv4 protocol to the IPv6 protocol, both Internet protocols are first operated in parallel on all network nodes. This mode of operation is called dual stack and is maintained until the IPv4 protocol can be dispensed with. The status of IPv6 is described in RFCs 1881, 1887, 2375 and 2462, among others, and the address structure in RFC 2373 and RFC 2374.