The task of the Internet Protocol( IP) is to transport data packets from a sender across several networks to a receiver. The transmission takes place at the network layer; it is packet-oriented, connectionless and not guaranteed. The IP datagrams are transported by the IP protocol as independent data packets even if the senders and receivers are identical.

The IP protocol does not guarantee compliance with a specific sequence or delivery to the recipient, i.e. datagrams can be lost due to network congestion, for example. Receipt acknowledgements do not exist at the IP layer. The maximum length of IP data packets is limited to 65,535 bytes. Since certain networks, as well as some Internetworking components, cannot handle this packet length, IP specifies the minimum packet length as 576 bytes. It may therefore be necessary to split IP data packets into smaller data packets, to fragment them. This reassembly is called reassembly. Each IP fragment itself has the format of an ordinary IP packet again. This measure can be used to adapt a required transport performance of the transport layer to the available network performance. The Transmission Control Protocol( TCP) and the User Datagram Protocol( UDP) are based on the IP protocol as transport protocols. 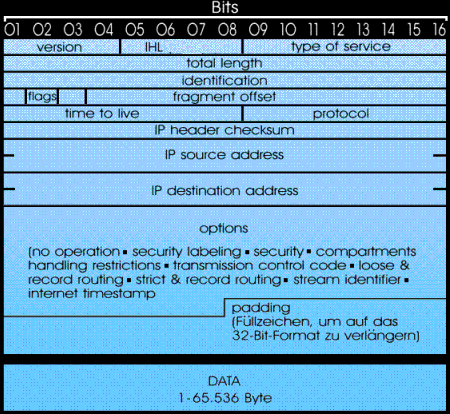 Structure of the IP data frame

Since the Internet Protocol is based on the network layer, which is responsible for IP routing through a network, the protocol also allows stations to be identified by their IP address. To prevent data packets from wandering endlessly through the network and placing a traffic load on it, the IP header has a time-to-live( TTL) field that specifies the lifetime of a datagram. This data field sets the length of time after which a datagram is discarded.

Protocols around the IP protocol

There are various network protocols, each of which was created in connection with an entire protocol family. The best known of these are the datagram-oriented Internet protocol of the TCP/IP protocols; Xerox's Internetwork Datagram Protocol( IDP) from the XNS family; the ISO-IP protocol standardized by the Open Systems Interconnection( OSI); and Novell's Internetwork Packet Exchange Protocol( IPX).