InfiniBand (IB) is an HS concept for inter- processor communication( IPC) for computer coupling in High Performance Clusters( HPC). The concept, which is based on a point-to-point connection, was launched by well-known computer companies and is also being promoted for standardization by them in the InfiniBand Trade Association( IBTA). The association includes companies such as Intel, Sun, IBM, Hitachi, Compaq, Dell, Microsoft and Hewlett-Packard. Comparable to Fibre Channel, InfiniBand can be operated on fiber and TP cables.

InfiniBand is designed as a switched I/O system, connecting individual output units, processor nodes and I/O platforms such as mass storage at a high data rate via the I/O switch. The connection is made via a switching fabric. The point-to-point connection operates full duplex. In the early years, the transmission rate was 2.5 Gbit/s, resulting in a usable transmission rate of 250 MB/s per link in both directions with 8B/10B coding. 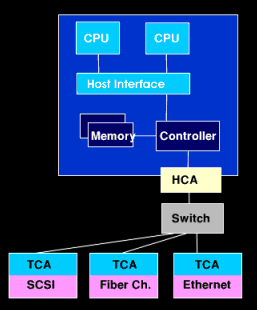 InfiniBand concept with HCA and TCA

In addition to this standard data rate (1X), which is based on a link connection with two pairs of conductors, InfiniBand defines the bundling of 4, 8 and 12 links for higher transmission rates. The resulting transmission rates are 10 Gbit/s, or 1 GB/s usable data rate, and 30 Gbit/s, or 3 GB/s. The distances for a link can be 1,000 m and more. Newer developments have a tenfold higher data rate of 25 Gbit/s and achieve data rates between 25 Gbit/s and 300 Gbit/s or 25 GB/s in the 1x, 4x, 8x and 12x stages.

The InfiniBand concept recognizes four network components: the host channel adapter( HCA), the target channel adapter( TCA), the switch and the router. Each component has one or more ports and can be connected to another component via a speed class (1X, 4X, 12X). 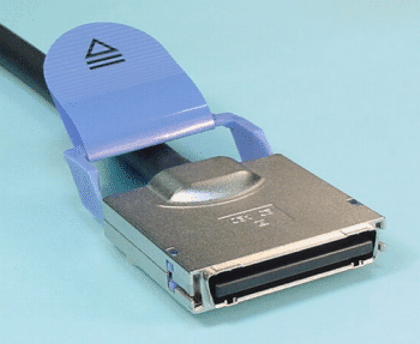 For example, a Host Channel Adapter can be connected to one or more switches, which in turn connect the input/ output devices to the switch via a TCA. The host channel adapter can thus communicate with one or more target channel adapters via the switch. Multipoint connections can be established via the switch. The operation of the InfiniBand router is essentially similar to that of the switch; however, the router can transfer data from local subnets to other subnets. 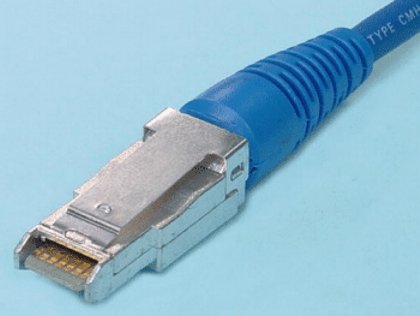