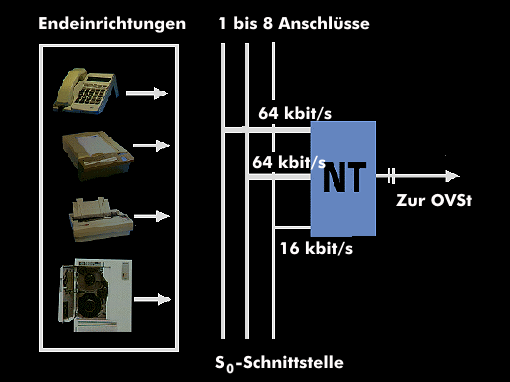 Connection of communication terminals to the B channels 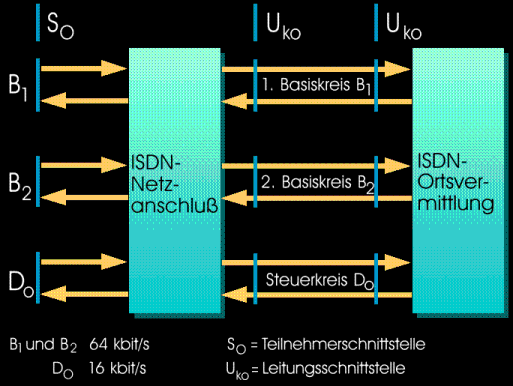 S and U interfaces

In addition to the basic connection, there is also the primary multiplex connection with the S2M interface for extensive data traffic. The primary multiplex connection is used to connect medium to large digitalprivate branch exchanges. It allows subscriber equipment to be connected to the ISDN local exchange, with a maximum information capacity of 30 x 64 kbit/s (i.e. 30 B channels). In addition, a D channel with a capacity of 64 kbit/s (D2) is available, which is used to transmit all the necessary signaling information between the subscriber area and the local exchange (DIVO). The standard for the S2M interface is described in ITU-T Recommendation I.431. The protocol of the D channel is identical to the signaling protocol for the ISDN basic access in the D0 channel.

The UK0 interface is terminated at the subscriber by the network termination (NT). The four-wire S0 interface is provided after the NT for the connection of ISDN terminals

The UK2 interface is an interface for transmission paths in primary multiplex connections with conventional copper twisted pairs. The same interface with fiber optics has the designation UG2 interface. Inaddition to these interfaces, there is also the UP0 interface, which works with the ping-pong method and is predestined for use in the area of private branch exchanges, because it allows existing in-house telephone cabling to be used for ISDN communication. The UP0 interface is a two-wire interface.