The name 6LoWPAN stands for IPv6 over Low Power Wireless PersonalArea Networks. It is a working group of the Internet Engineering Task Force( IETF). With 6LoWPAN, wireless networks support the IP protocol and can use it to establish homogeneous networks with addressed end-to-end connections. The 6LoWPAN protocol provides a direct connection of battery-powered devices or sensor networks to the Internet of Things( IoT).

6LoWPAN as an IP protocol for Wireless Internet of Things

The 6LoWPAN working group has developed an encapsulation and compression scheme for IPv6 data packets that can be transmitted over an ultra-low power Wireless Personal Area Network(WPAN) as described in IEEE 802.15.4. And in this concept, IPv4 and IPv6 are the transport mechanisms used to transmit data over local area networks( LAN), metropolitan area networks( MAN) and wide area networks(WAN), respectively the Internet. 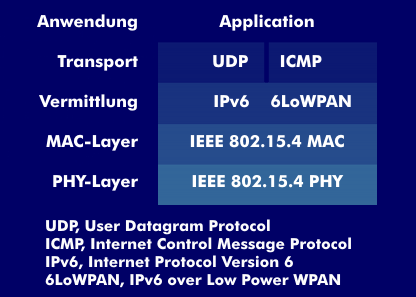 The problem that arises here is the different character of IPv6 and IEEE 802.15.4, whose properties must be adapted to each other by means of layer mapping. This includes the adaptation of the data packet length. IPv6 has a Maximum Transmission Unit( MTU) of at least 1,280 bytes, whereas 802.15.4 has a standard packet length of 127 octets. There are also striking differences in addressing: The IPv6 address comprises 128 bits and is hierarchically structured, whereas 802.15.4 uses an extended 64-bit address and a 16-bit address for the Personal Area Network( PAN), as well as special group addresses. The addresses must be adapted by means of address mapping. There are further differences in the design of the devices and in the optimization of the parameters.

The 6LoWPAN protocol is dealt with under RFC 6282.