10GBase-CX4 is a standardized 10 Gigabit Ethernet ArticleID="23401" ArticleURL="Ethernet- interface-Ethernet-interface" ArticleTitle="Ethernet-interface"> Ethernet interface according to the IEEE standardIEEE 802.3ak, which uses the copper-based direct access cable( DAC) as the transmission medium.

10GBase-CX4 is suitable for high-speed data transfer in racks and for cabling racks close to each other in data centers, server rooms or distribution rooms. 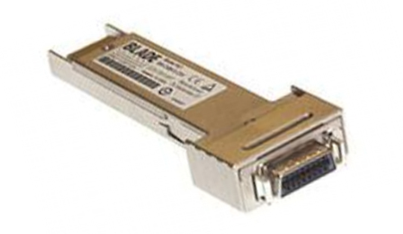 In the CX4 standard, developments from InfiniBand and 10 Gigabit Ethernet are adopted. For example, the 10 Gigabit Attachment Unit Interface( XAUI) and the IB4X cable, which is also used in Infiniband.

The 10 Gigabit data stream is split into four transmitter and receiver lanes for transmission. Each of these lanes operates at a data rate of 3.125 Gbps per channel and 8B/10B coding. Technically, the 10GBase-CX4 interface is implemented with an optical transceiver in an XFP module or SFP+ module.