100Base-T became an IEEE standard as IEEE 802.3u at the beginning of the 1990s, which is essentially based on the technologies of 10Base-T. 100Base-T, known as Fast Ethernet, has several variants that differ in the physical layer and thus in the transmission media: 100Base- TX, 100Base- T2, 100Base-T4 and 100Base-FX.

All 100Base-T networks have a star structure and are connected to a central hub. With a transmission rate of 100 Mbit/s, this method retains the MAC layer and thus the classic CSMA/ CD method. As a consequence, only very small distances can be bridged with 100Base-T and no real-time applications can be carried out. In the case of TP cables( UTP, STP), the maximum extension is 200 m, and 400 m if fiber optic cables(FOC) are used. 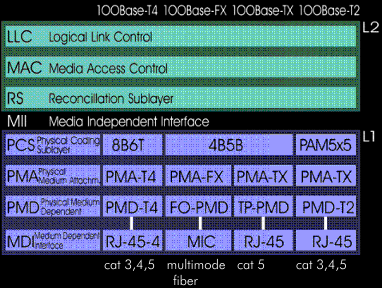 Structure of the lower layers of Fast Ethernet networks 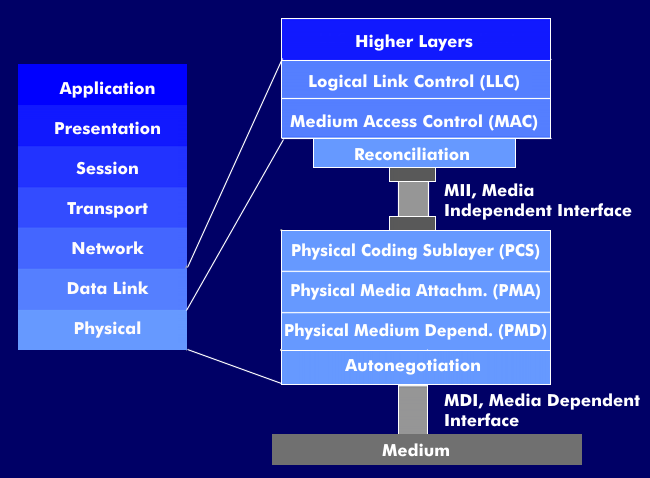 100Base-T technology offers only limited configuration options suitable for connecting end devices. This technology is unsuitable for backbone applications because of the limited distances. The configuration options allow end device connections via TP cables and optical fibers. When two terminals are connected directly without an intermediate repeater, the maximum lengths are 100 m for TP cables and 412 m for optical fibers. When a repeater is used in between, the distance increases to 200 m for TP cables and 205 m when two repeaters are used. The distances for fiber optic cables are reduced when repeaters are connected in between. 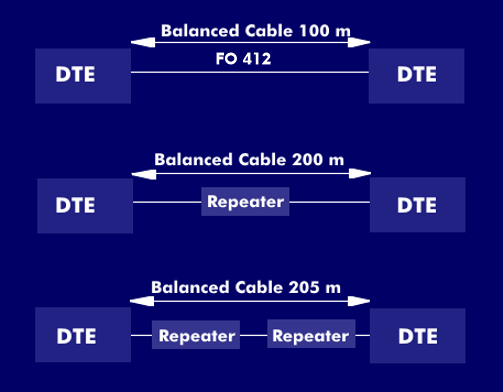 New developments have been introduced inthe 100Base-T working group. One proposal deals with a new physical interface for 100Base-T, another with full- duplex Ethernet, and a third with the Binary Logarithmic Arbitration Method( BLAM) access method.

For automotive technology and industrial use, there is Single-Pair Ethernet( SPE), a technology that works with a single twisted pair cable, and 100Base- T1, a corresponding interface for 100 Mbit/s.