Due to a deterministic access method with a fixed time frame, isochronous transmissions are possible. In addition, it is possible to configure star-shaped mesh networks that support routing. In such network configurations, there are stations with full functionality, the Full Function Devices( FFD), which are responsible for communication, and those with reduced functionality, the Reduced Function Devices( RFD). The latter form the ZigBee end devices, for example the sensors from a sensor network, which communicate via the FFD nodes, which are the ZigBee routers. 802.15.4 is used in ZigBee and in MeshScape, among others. In the ZigBee protocol stack, the physical layer( PHY) and medium access control( MAC) correspond to 802.15.4. 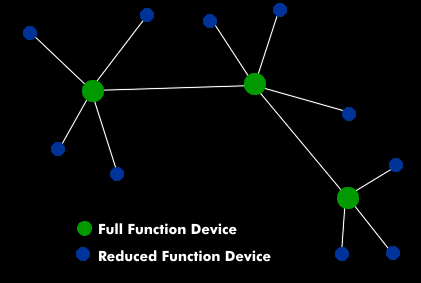 In 802.15.4a, transmission and modulation techniques are used, such as ultra-wideband and the chirp spread spectrum( CSS), which achieve high transmission quality at low loss and data rate, and relatively low energy consumption in radio transmission. In this standard, a simple Direct Sequence UWB( DS-UWB) is specified for the physical layer, which also allows ZigBee to operate at a higher data rate. In addition, the 802.15.4a access method is used in nanoLOC, a wireless network for manufacturing equipment.

IEEE 802. 15.4b goes even further and aims to further improve 802.15.4a properties by relying on simplified algorithms and Parallel Sequence Spread Spectrum (PSSS) which avoids ambiguity, increases data rate and interference immunity in multipath propagation.

80215.4e is a modified version of the IEEE 802.15.4-2011 standard with the goal of adding more functionality to the MAC layer. With these enhancements, 802.15.4e is expected to better support the industrial market and be compatible with the planned modifications for the Chinese market. The key feature of 802.15.4e is channel hopping, Time Slotted Channel Hopping( TSCH), which is more suitable for 802.15.4 network deployment in the industrial environment because it is more robust to interference and fading.

The 802.15.4f working group is developing a standard for the physical layer while extending the MAC layer for active RFID systems.

The 802.15.4k working group is responsible for standardizing the Low Rate Wireless Personal Area Network (LR-WPAN). This technology supports self- configuration of sensor and actuator networks, redundancy in the transmission link by providing higher reliability, and extension of the transmission range by providing multi- hop capability. The data rates of the LR-WPAN technology are 20 kbit/s, 40 kbit/s and 250 kbit/s.