In 2009, the IEEE 802.11n working group standardized the Enhanced Wireless Consortium( EWC) proposal for high-speed wireless transmission with data rates of 600 Mbit/s. This proposal is compatible with WiFi and designed for home networking. Whereas such data rates in home networking only occur in connection with high-definition television( HDTV). WLANs with these data rates are thus placed on the same level as wired local networks such as Gigabit Ethernet.

The proposal was submitted by Agere and is based on broadband channels using the MIMO method. The frequency ranges are the ISM band at 2.4 GHz and the UNII band at 5 GHz. In the 2.4 GHz band, 13 channels are available in Germany, 19 in the 5 GHz band, and 11 and 24 in the USA.

As modulation schemes, 802.11n uses quadrature amplitude modulation (64QAM) and orthogonal frequency division multiplexing( OFDM). In this coding, each symbol is represented by six bits. The transmission speed is determined by the Modulation and Coding Scheme( MCS). It depends on the channel width, the modulation method, the number of radio channels and the code rate. For example, when using a 20 MHz channel, the nominal transmission speed of currently 54 Mbit/s with 2x2 20 MHz channels is increased to 150 Mbit/s by Multiple Input Multiple Output (MIMO) with two Spatial Streams( SS). A 4x4 configuration with two 40 MHz channels in each of the two frequency bands results in a fourfold increase to a nominal 600 Mbit/s. The real data rate is likely to be about half the nominal one. As an alternative to MIMO, beamforming or space time block coding( STBC) can also be used, in which multiple parallel data streams are transmitted in one radio channel. 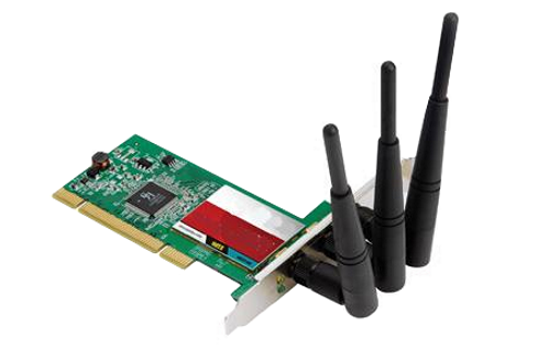 The specifications of 802.11n, standardized as IEEE 802.11n-2009, were developed and driven by the Enhanced Wireless Consortium (EWC). Other activities to increase the data rate of WLANs exist from Worldwide Spectrum Efficiency(WWISE) and TGnSync. The Counter Mode with CBC- MAC Protocol( CCMP) is used as a security protocol in 802.11n.