802.11a uses Orthogonal Frequency Division Multiplex( OFDM) and spread spectrum technology( DSSS). The RegTP has released two frequency bands for Germany in the 5 GHz range, the UNII band: The frequency range from 5.150 GHz to 5.350 GHz with eight 20 MHz channels and the frequency range between 5.470 GHz and 5.725 GHz with a further eleven 20 MHz channels. Each of these 19 channels in total is made up of 52 narrowband channels with a bandwidth of 300 kHz. The lower frequency band may only be used indoors. The allowed transmit power, the Equivalent Isotropically Radiated Power( EIRP), depends on whether the 802.11a devices are without or with Transmit Power Control( TPC) and also have Dynamic Frequency Selection( DFS). 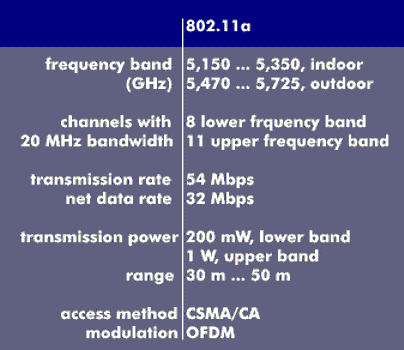 Depending on the equipment, the transmit power is 30 mW (without TPC), 60 mW (with TPC) and 200 mW (with TPC and DFS). On the other hand, 1 W may be transmitted in the upper frequency range outdoors.

Classification of the various WLANs

Using OFDM, data is transmitted over all channels and then combined again. Since each channel has a transmission rate of 125 kbit/s, 48 channels are used for data transport, resulting in a summed data rate of 6 Mbit/s. The data rate can be scaled in 6 Mbit/s intervals between 6 Mbit/s and a maximum of 54 Mbit/s.

In the U.S., there is one frequency band between 5.725 GHz and 5.825 GHz for eight non-overlapping channels. In addition, some European countries have released other frequency bands. 802.11a is compatible with the 802.11n standard specified in 2009. According to certification by the WiFi Alliance, 802.11a corresponds to WiFi 2.