The IEC antenna connector is a coaxial RF connector that was developed as early as the 1920s and is used on antenna cables and antenna connection cables. The IEC connector consists of a plug and a socket which are inserted into each other.

Antenna connector according to IEC 60169-2

The plug has a fixed pin for the inner conductor with a diameter between 0.6 and 1.13 mm, which is inserted into the slotted inner sleeve of the socket. Similarly, the outer shield of the plug is fixed and that of the socket is slotted so that it can yield resiliently when the plug is inserted. The IEC antenna connector has an inner diameter of 9.5 mm and can be used for coaxial cables with an outer diameter of up to 7.5 mm. It has good RF tightness because both the inner pins and the outer sheath are fully covering.

The IEC antenna connector has an impedance of75 ohms and can be used in the frequency range up to 2.2 GHz. It is available as a plug or socket, as a coupling and as a plug-socket adapter, and in many combinations with the F plug. It is also available in an angled version. The IEC plug is used in cable television, DVB-T, analog television, FM broadcasting and many other applications. 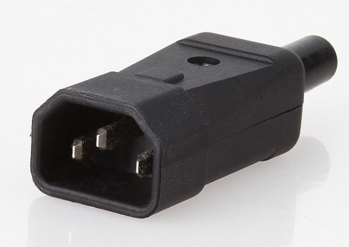 Device plug for mains voltage according to IEC and VDE

The IEC appliance plug is a two- or three-pole power supply plug that has also been standardized by VDE under VDE 0623. It is used in electrotechnical devices such as shavers, hair dryers, tablets, desktops and laptops, as well as in kitchen appliances and entertainment industry devices. The IEC plug comes in a variety of forms with different pin shapes, guide slots, notches or curves that prevent incorrect insertion. The IEC appliance plug is used to supply the mains voltage. The three-pole versions have a protective earth conductor as a third contact.