The FTPS protocol differs from the SSH File Transport Protocol( SFTP) in that file transport is performed using the SSL protocol or the TLS protocol, and this data channel is encrypted. This is in contrast to the SFTP protocol where the communication is done using Secure Shell (SSH). Encryption can be done when the connection is established or through SSL authentication. 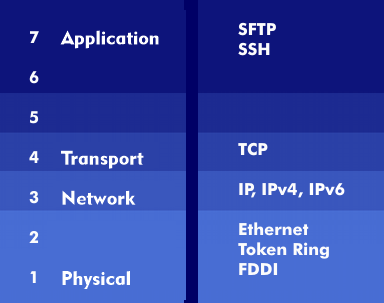 FTP over SSL in the protocol stack

Secure Socket Layer (SSL), like Transport Layer Security (TLS), provides AES encryption with a key length of up to 256 bits. FTPS is not standardized and is implemented differently. The FTPS file transfer method offers a high level of data security because all access data, control data and user data are encrypted and thus protected against attacks.