The main difference between DOCSIS and EuroDOCSIS is the channel width. EuroDOCSIS has a bandwidth of 8 MHz in the downstream channel, compared to 6 MHz in the U.S. DOCSIS. All differences of EuroDOCSIS refer exclusively to the physical layer of the OSI reference model, all other layers, especially the MAC layer, remain unchanged.

Based on the bandwidth of 8 MHz in the downstream, transmission rates of 38 Mbit/s can be achieved with quadrature amplitude modulation (64QAM), and even 52 Mbit/s with 256QAM. In the upstream, quadrature phase shift ke ying( QPSK) can be used and, depending on the bandwidth selected, transmission rates of between 320 kbit/s and 5.120 Mbit/s can be achieved. With 16QAM modulation in the upstream, the specified values are doubled. These upstream and downstream bandwidths are available at a node and are shared between the subscribers. 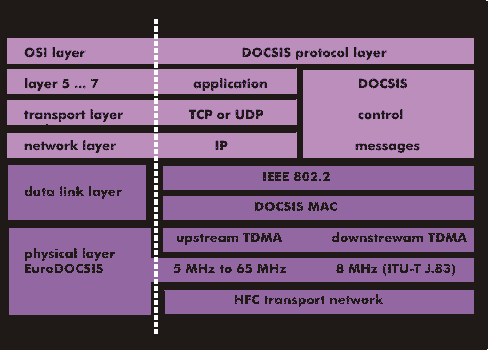 DOCSIS protocol layers in relation to the OSI layer model 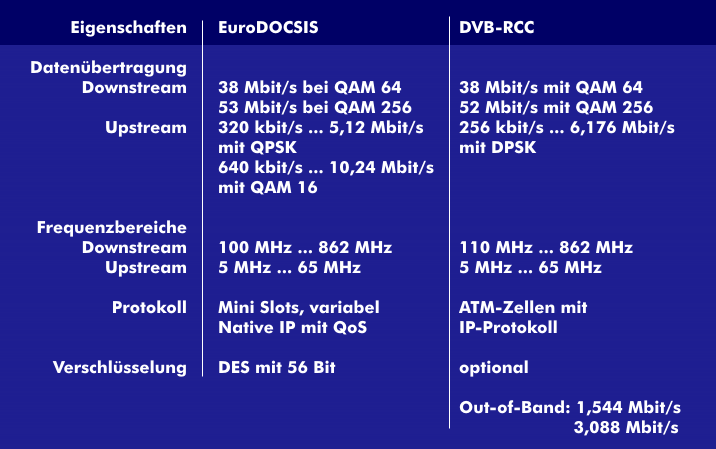 Comparison of EuroDOCSIS and DVB-RCC specifications

If packet-oriented voice communication is operated over DOCSIS networks as voice over cable( VoCable), corresponding configurations must be supported by various network components. The functionalities of these components include the connection of the telephone, which is directly connected to the MediaTerminalAdapter( MTA), which in turn is connected to the Cable Modem( CM). This communicates with the head-end station, where the Cable Modem Terminal System( CMTS) is located, which is connected to the IP network. The quality of service of the voice communication is negotiated by the Call Management Server( CMS); call control, monitoring and registration are handled by the Gate Controller( GC) and the Record Keeping Server( RKS).

DOCSIS is described in ITU Recommendations J.112, and the frame structure in J.83A.