Ethernet originated from the DIX standard (DIX stands for the companies Digital Equipment Corporation, Intel and Xerox). This standard knows two versions: DIX V1.0 and DIX V2.0, with DIX V2.0 Ethernet being developed from the latter. All three versions differ slightly in the frame format.

The Ethernet frame according to IEEE 802.3 consists of the 7 byte long preamble, which is used by the receiver for bit synchronization of the first frame bit. For the bit synchronization a 1-0 combination (10101010.. 10101010) is sent as bit pattern, seven times in total. The preamble is followed by the Start Frame Delimiter( SFD), whose bit pattern 10101011 marks the start of the frame. 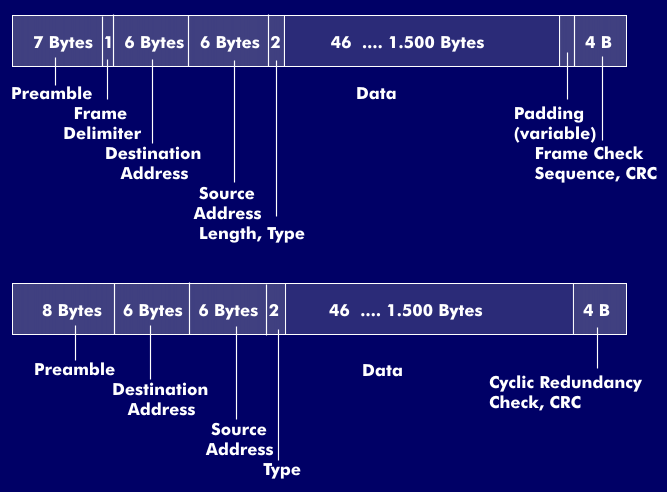 The following data fields identify the source address and the destination address with 48-bit addresses, where the first bit is used to distinguish between individual addresses and group addresses. The second bit is used to distinguish between local and global addresses. Other data fields include the 2-byte length field that identifies the number of octets in the LLC data field, the data field that can be up to 1,500 bytes in MTU format and contains the data generated within the LLC layer and passed to the MAC layer, the data field for the padding bits( PAD) used to pad the frame to at least 64 bytes, and the 4-byte checksum field( FCS) used to map the checksum from the address fields and the data fields. The frame length of the CSMA/ CD frame is limited in its corner values: The minimum frame length is 64 bytes, and the maximum is 1,518 bytes. The frame length has been extended by 4 bytes to 1,522 bytes for VLAN tagging by the frame extension specified in 802.3as.

According to IEEE 802.3, after the length field, the Ethernet frame can include additional data fields defined in IEEE 802.2 for the service access points - DSAP (Destination) and SSAP (Source) - of one byte each and a 6-byte control field.

For Gigabit Ethernet, the frame is extended by the Carrier Extension data field. This data field follows the checksum field and extends the minimum frame length from 64 bytes to 512 bytes. The reason for this is the size of the collision domain, which would be too small at the transmission rates of Gigabit Ethernet.

The payload of the standard Ethernet frame is limited to 1,500 bytes. Larger payloads are called jumbo frames and can comprise up to 9,000 bytes.