Due to the lack of standardized protocols, the Department of Defense(DoD) created a protocol family for open communication in 1980, the DoD protocols. The architecture model of the DoD protocols was created in the mid-1970s and knows only four communication layers, the network access layer, the Internet layer, the host-to-host layer and the process layer. It therefore differs greatly from the OSI reference model, which was only developed later.

The Network Access Layeris represented by the lower two layers of the OSI reference model and has the task of regulating network access and transmitting and delivering data between the computers located on the network. On the network access layer, Ethernet with the CSMA/ CD method and Token Passing, NetBIOS, Serial Lines, Hyperchannel and FDDI operate as known protocols. 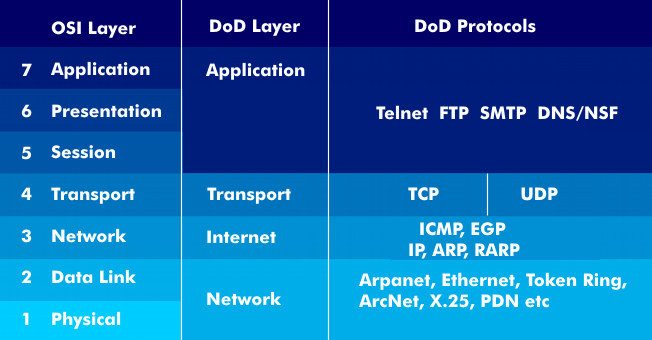 The four layers of the DoD protocol structure

On the next higher layer, the Internet Layer, which functionally corresponds to layer three of the OSI reference model, the best-known protocol is the IP protocol. Other protocols include the Address Resolution Protocol( ARP), Reverse Address Resolution Protocol( RARP) and the Internet Control Message Protocol( ICMP). The routing protocols on the Internet layer are the Exterior Gateway Protocol( EGP), the Routing Information Protocol( RIP) and Open Shortest Path First( OSPF). The task of this layer is the targeted delivery of data in a network with or without connected subnets. The IP protocol must provide connectivity between and within networks, it must deliver data between source and destination stations, and it must perform routing for subnets.

The transport layer for end-to-end connections is supported by the Transmission Control Protocol( TCP) and the User Datagram Protocol( UDP). An error-protected transport connection is established on this layer with flow control, connection monitoring, error handling and the possibility of multiple use through multiplexing.

The application protocols are located on the Process Layer and correspond to OSI layers 5 to 7. From a large number of protocols located on these layers, the following applications are used most frequently: file transfer with the File Transfer Protocol( FTP), Telnet as virtual terminal access, the Simple Mail Transfer Protocol ( SMTP) for e-mails, remote login( rlogin) and the Network File System ( NFS). Another correlated standard is the SNMP protocol, which supports network management.