Software architectures require the integration of cross-cutting concerns in order to implement the so-called core concerns. Their implementation is not limited to individual components, but is distributed over many areas throughout the entire system. Thus, completely different core functionalities are confronted with the application of a certain functionality.

The problem of Crosscutting Concerns is not new - it exists already, since there are software systems. Crosscutting concerns are used to describe functionalities such as authentication, transactional behavior, distributed communication or persistence. Particularly in larger projects the use of object-oriented mechanisms leads to a coupling between core and crosscutting Concerns. This influences criteria such as maintainability, maintenance and reusability of a software. There are different approaches to the modularization of Crosscutting Concerns such as Design Patterns, inversion or the aspect-oriented programming( AOP). 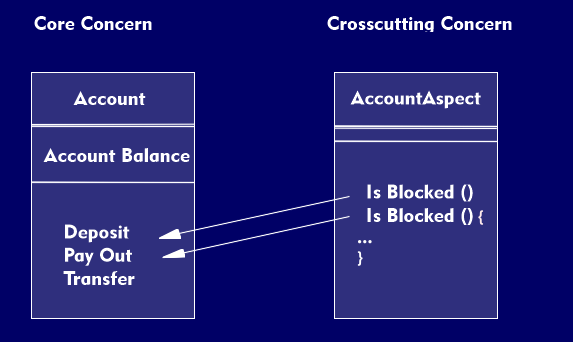 Typical examples of crosscutting concerns are:

Crosscutting is distinguished between:

Dynamic crosscutting. The behavior of objects is modified by adding further steps to the execution of methods.

Static crosscutting. This modifies the structures of a program. Possibilities are for this both by the adjustment of the inheritance hierarchy and by addition of further data structures and methods to a class. Also an initiation of additional checks of the translation is possible.

A central principle of the software engineering is the separation of Concerns introduced by Dijkstra (1976) - which means generally a separation of the concerns. Concretely in the context of Concerns it explains that a Concern identifies, encapsulates or also manipulates only parts of a software for exactly one area of responsibility. As it were in consequence this applies also to Crosscutting Concerns. Both core and Crosscutting Concerns are qualitatively high-quality, if these

The principle presupposes however that Concerns can be specified as independently as possible from each other as well as implemented, in order to be joined then finally as late as possible to a total system. The problem thereby is that the object-oriented programming languages offer no other construct apart from the classes for the modeling of Crosscutting Concerns. This results in the following two typical problems:

Code Tangling. The mixing of different Concerns in one module - all code is encapsulated in one class.

This contradicts apart from the Separation OF Concern also the principles of the encapsulation as well as the functional decomposition, with which the hierarchical dismantling of a software system is described into partial functions.

Possible approaches to the modularization of Crosscutting Concerns can be:

A concrete beginning regarding Crosscutting Concerns from practice is to be introduced here still briefly - the Framework Enterprise JavaBeans (EJB) of the company Sun. Here crosscutting Concerns for the so-called Enterprise Beans such as failure safety, clustering, transactional behavior, security and persistence are made available by the EJB runtime environment in an application server. However, the feature requires the user to hand over control for all its components to the runtime system, and interact with it through appropriate interfaces. The framework specifically targets client-server architectures.