The Bluetooth protocol stack consists of two protocol groups: The Bluetooth core protocols and the Bluetooth host protocols. The core specifications include the physical parameters for radio transmission and the baseband protocol above it, the Link Manager Protocol( LMP) for the link manager, the interface to the host controllers, the Host Controller Interface( HCI) and audio transmission.

The transmission functional area is formed by the radio technology and the baseband technology. They are used to access the air interface and the physical data channel. These core protocols have been published by the Bluetooth Special Interest Group( BSIG). 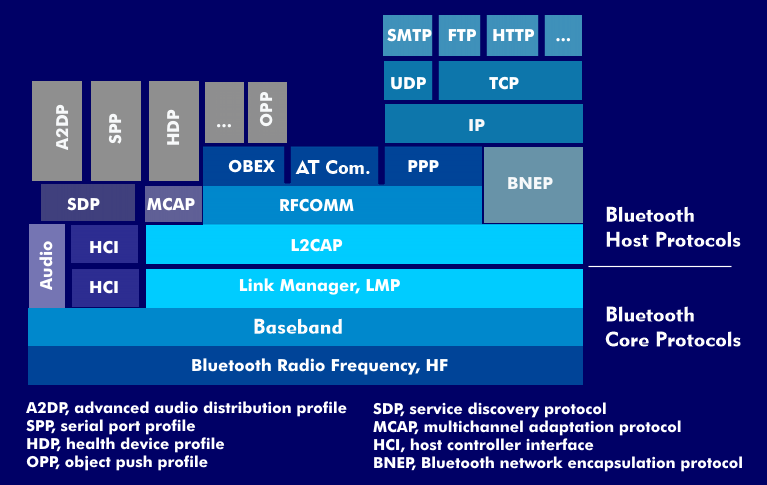 Thelayers above with the Bluetooth host protocols define the logical channels, virtual interfaces, network connections and services. These include the Logical Link Control and Adaptation Protocol( L2CAP), the Service Discovery Protocol( SDP), the virtual serial interfaces implemented with RF Communication( RFCOMM) and the network connections via the Bluetooth Network Encapsulation Protocol( BNEP). The RFCOMM interface acts as a serial interface on which all known transmission, transport and application protocols are based, including the IP protocol, PPP protocol, TCP protocol, UDP protocol, WAP protocol and the Wireless Application Environment (WAE). The well-known services such as SNMP, HTTP and FTP are based on the transport protocols, and the many Bluetooth profiles are based on the service discovery.

The connection of Bluetooth networks to public networks is defined by the Bluetooth profiles, as are the application-specific functions. For example, the protocol interface for the telephone API can be formed by the AT commands or TCS binary. The AT commands are based on RFCOMM, the Telephony Control Specification (TCS) on L2CAP.