Apple Pay is a mobile payment system for online billing from Apple and was introduced in September 2014. Apple Pay requires the user to have an iPhone 5 or an Apple Watch and works with NFC technology via the antenna design built into the smartphone, with the dedicated Secure Element chip and the Touch IDfingerprint scanner. Users need only touch their iPhone or Apple iWatch with their fingertip to pay in astore or online.

Apple Pay was initially tested in the U.S. at the end of 2014 and accepted from the outset by authoritative credit card organizations and banks as well as leading retail chains.

The contactless payment method using near- field communication means that stores and restaurants can no longer see the names, card numbers or security codes of their customers. Apple itself also says it does not keep a purchase history of iPhone owners. If an iPhone is lost or stolen, the owner can block further payments using the "Find My iPhone" app. 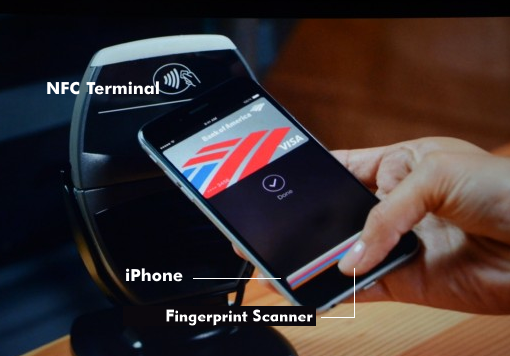 To set up Apple Pay, users must enter their credit card data into the iPhone, which is then transmitted to the credit card company. This creates an encrypted code, the Device Account Number (DAN), which is stored in encrypted form on a memory chip on the iPhone. Later, additional credit or bank cards can be added to Passbook.

The payment itself is made using authentication via the iPhone's fingerprint scanner via Touch ID. The payment process is secured via the DAN number and a temporary security code. Both pieces of information are transmitted from the iPhone to an NFC terminal connected to the store's cash register and from there to the credit card company, which verifies the data after decryption. The transactions are chargeable and are settled with Apple. User data is held locally on the smartphone rather than in a cloud, which can be detrimental if stolen.

With the Apple Pay application programming interfaces( API), independent developers can write their own shopping apps with proof of identity via Touch ID on the iPhone starting with iOS 8.