Functions of the ATM layer

At the ATM layer, the information is packetized or depacketized, placed in the information field, and the header and identifiers are determined. Cells are demarcated from each other and added to or removed from the cell stream for multiplexing or switching. Transparent transport of ATM cells between network nodes communicating at a higher level takes place. 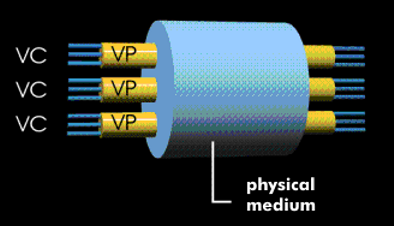 Before this can happen, it is necessary to establish connections and negotiate quality of service( QoS) parameters for that connection. After connection establishment, the ATM cells of the different connection channels and paths( VCC, VPC) are multiplexed into a continuous stream of cells.